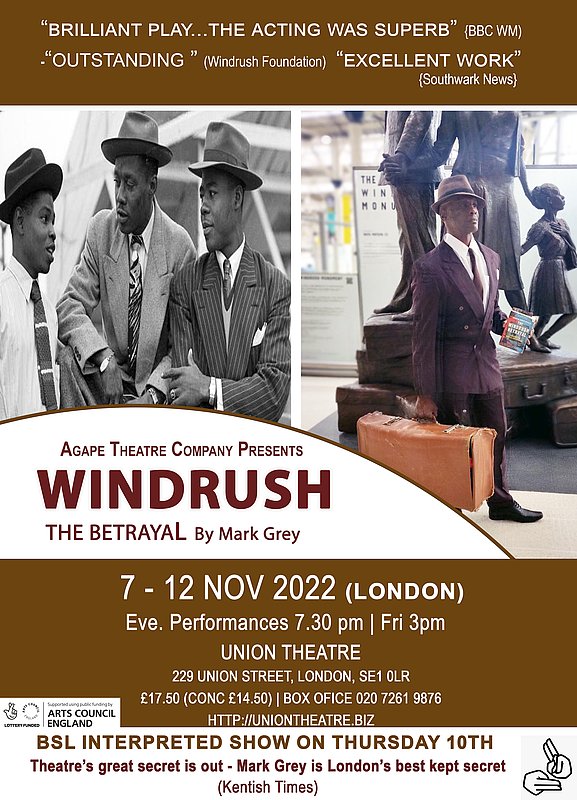 As our Home Secretary in May 2012, Theresa May implemented government policy to reduce net migration from the hundreds of thousands to ten thousand per annum. This policy came to be known as the “hostile environment”. Many who had come to the UK legally as children, were harassed, arrested, detained and deported as the Conservative government targeted children of Commonwealth migrants in order to bully them out of the country. Guardian journalist Amelia Gentleman brought the shameful policy to the attention of the nation and saved dozens of legal British subjects from “removal”. Award winning playwright Mark Grey has taken the individual stories as reported in the National Press of Anthony Bryan, Paulette Wilson, Sylvester Marshall, and Michael Braithwaite and woven a story that highlights the way that children of the Windrush generation were shamelessly targeted by their own government, refused access to work, benefits, housing and healthcare in an attempt score political points by driving them out of the country they had called home for over fifty years. It was disgraceful, disgusting and it was shameful. If not for Amelia Gentleman and the Guardian, they would have succeeded.  This is a true story, and Agape Theatre Company is doing its part to help ensure that everyone is aware of the facts.

"Theatre's great secret is out. (Mark Grey) is one of London's best kept secrets."   (Kentish times)

Agape Theatre Company is pleased to present Windrush – The Betrayal.

How The Guardian Newspaper exposed the prejudicial and biased treatment of legal British Subjects by the Government's "hostile environment" policy. An ideal piece for Entertainment, Education, and Discussion 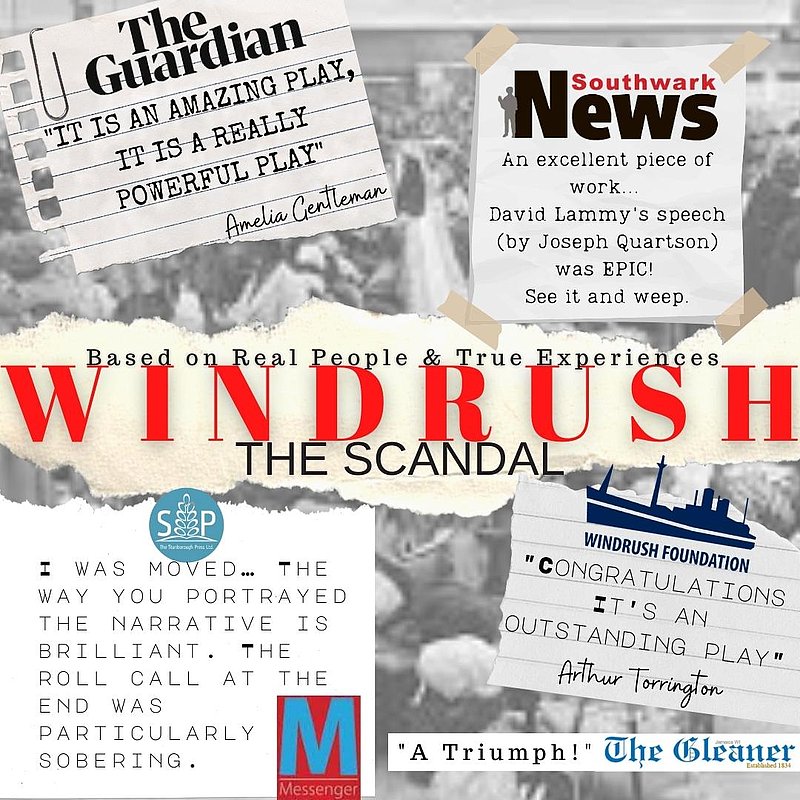 “It’s an amazing play. It really is a powerful play.”
-Amelia Gentleman – The Guardian

“Congratulations on an Outstanding Play.”
-Arthur Torrington – The Windrush Foundation

“An excellent piece of work. The cast perform with their hearts as well as their minds. We must thank ALL the cast... David Lammy's speech recreated here by (Joseph Quartson) was epic! See it and weep.
- Southwark News-

“I was moved. The way you portrayed the narrative was brilliant. The roll call at the end was particularly sobering.”
-The Messenger-

Full Article in The Gleaner

Reviews of our previous work

End The Silence is emotionally and intellectually engaging. A must see for men, women, and teenagers.
-H.E. Seth George Ramocan Jamaican High Commissioner-

A very interesting and entertaining show... The acting was uniformly excellent, one of The standouts being Levi Harrington played with the right amount of arrogance, charm, and menace by Joe Quartson. The play had me laughing, shaking my head, feeling sorrow & anger
-Lovers of Black Theatre-

A wonderful show. The writing is superb!
-Elite Management-

(Asylum) skillfully depicts the true meaning of peace and contentment when we are prepared to face up to the realities our past issues amidst the recurring challenges of the present.

Misie Goode has a strong presence on stage. She was a tour de force! – Evolving Creatives

Agape has also been well received by the Press on previous visits to the London Fringe.

-THE SCOTSMAN-“There is an integrity and passion, which gives it its own particular charm.”

-THE HERALD-“Redemption song is a challenging presentation, with a strong ‘feel good’ factor. Worth a look” “Mark DeLisser’s Louie, a dynamic and attractive figure.” “Honours to Madeline McQueen, Her performance was a delight, and hugely enjoyed by the audience.”

-The Voice- The Loser is a Winner! Leaves the audience with much more of what more expensive productions offer, but fail to deliver.

"Theatre's great secret is out. (Mark Grey) is one of London's best kept secrets."

"A strong cast & a well written script. An intensity brought about by the quality of the acting. You are actually in the room with them gaining an insight into their minds"

“A sparky performance from Ellen-Gayle Harewood that appealingly draws out the contradictions of the character."

View this location in Google Maps