Sabbath 16 November saw much rejoicing at Bristol Central Church, as four new members were welcomed into fellowship.  The church was packed as members, friends and family witnessed their decision for the Lord, as former Bristol District Pastor Royston Smith baptised them, assisted by First Elder Kwasi Dankwa 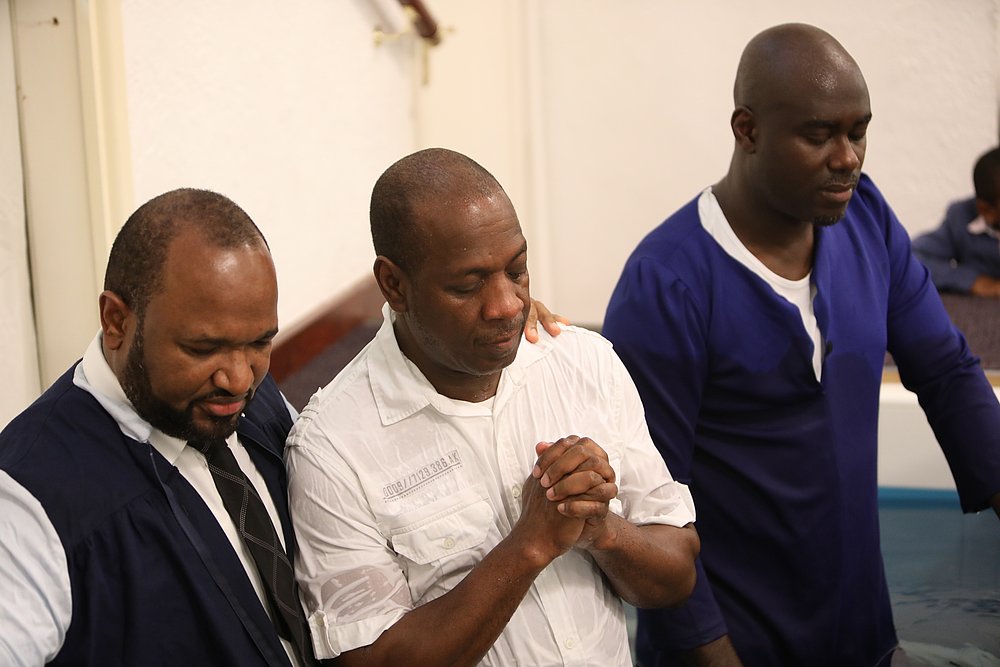 The first candidate to be baptised was Mark Colledge, who had had a remarkable experience.  Having come from a Protestant and Catholic family background, Mark felt that something was missing, so he secretly bought a Bible, and decided to search for the truth for himself.  He did this by reading the whole Bible through.  Twice.  He felt convicted by the Holy Spirit, which led him on an emotional journey, as he felt that he had to change.  As a result of his personal studies, he picked up that the Sabbath was the day of worship God required, not Sunday.  He felt so excited about what he’d learnt, that he wanted to share it, but for some time, he couldn’t find a church that kept the Sabbath, as he didn’t immediately associate Seventh-day Adventists with Sabbath keeping. 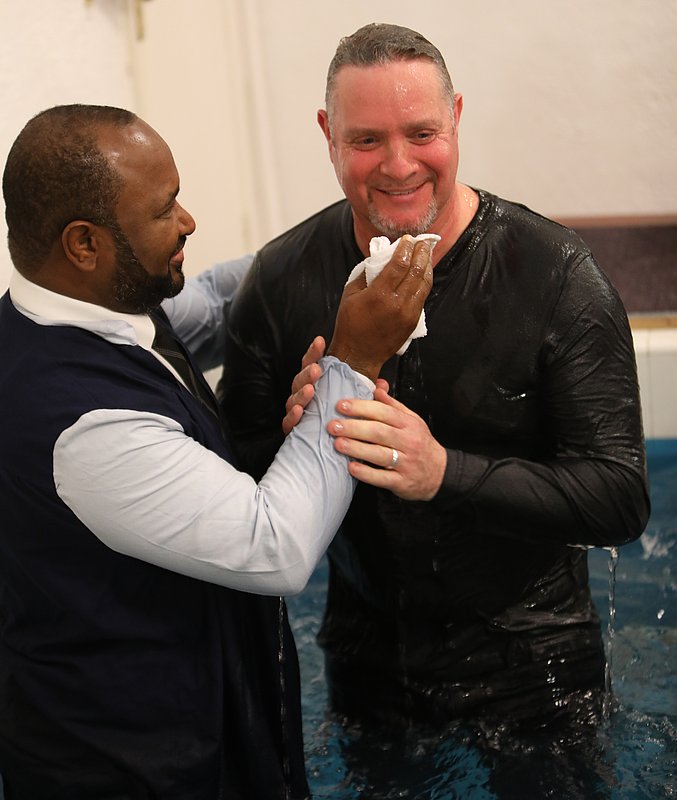 Eventually he found the Bristol Central church, and came down to the church on his motorbike.  He rang the Pastor, but didn’t get an answer.  However, Pastor Royston Smith soon rang him back and invited him to come and meet him at church.  He then introduced him to some members, who could help him with Bible studies. 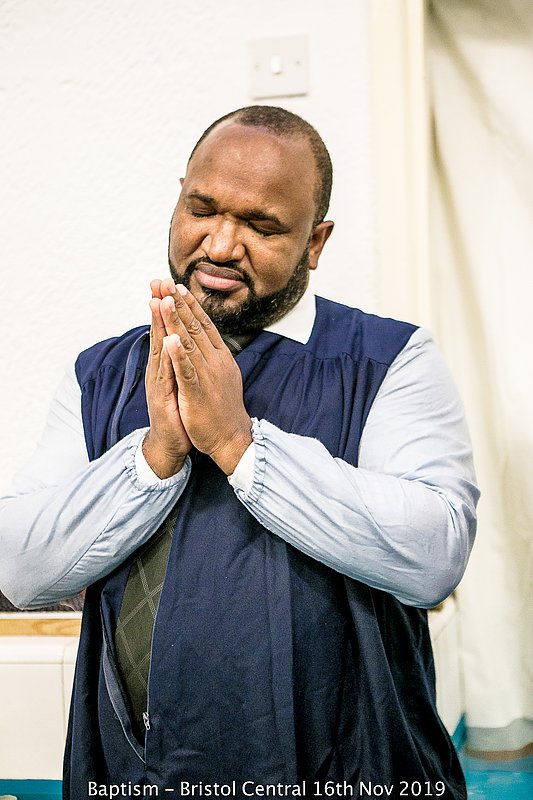 Mark said after the service, that it had taken him five years to get to this point, but he was confident that “The Bible brought me to this church, and I’ve been coming ever since”.

The second candidate was Shawn Hines.  He explained how much it meant to him to receive support from the church.  Having been an Adventist and then losing touch with the church, Shawn had been out of the church for a year or two.  Something made him come to his senses and he decided that “enough was enough.  I need to get back my walk with Christ.  I realised that there was nothing out there”.  Shawn said he had been there and done that, such as doing music, but throughout “the Adventist message stays with you”. 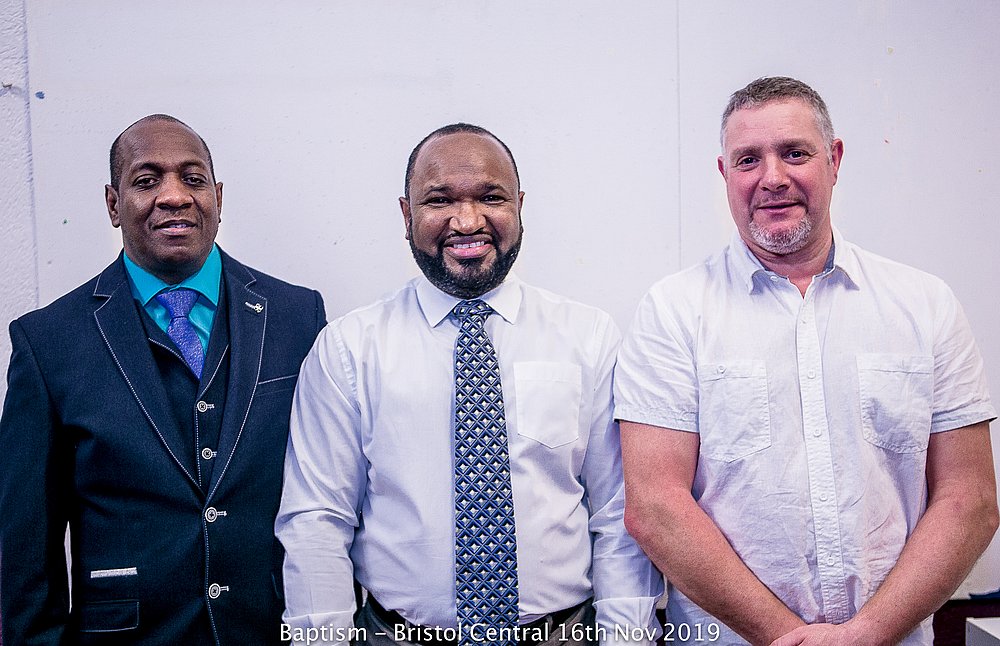 Shawn paid particular tribute to the church, as “I’ve met with some good people.  There’s a really good support network here, especially the men, as they really look out for each other. After church, we pray together, and we keep in touch during the week.  There’s a spiritual side of church, but also a social side”.

Keen to be used in the church, Shawn expressed his desire to make a difference, especially with young people, as he is a Lecturer by profession, and has dedicated his life to young people.  He wants to be a positive influence to them, either through music or academically.  “I’m geared up and ready for work”, he said. 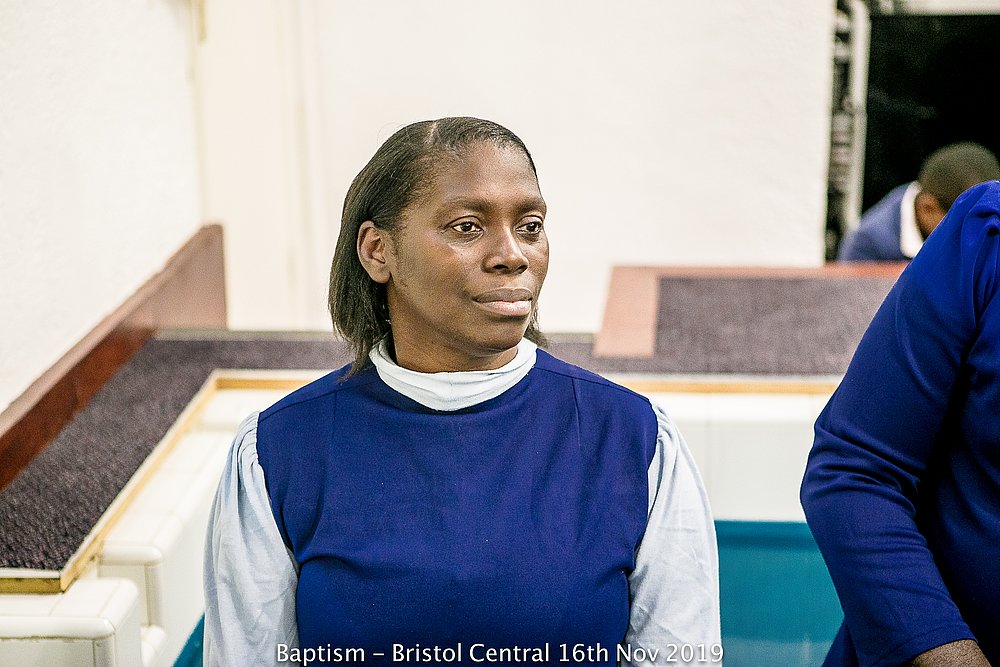 The next candidate was Andrea Griffiths.  Andrea was also brought up in the church, but went out for a number of years.  She said “I am ecstatic.  It’s been a long time, but something said to me, it’s time to go back”.  She described how sometimes she wanted to go to church on Sabbath, and then things went wrong when getting ready, which prevented her.  In the end, she was determined, and started going little by little, then helping with the children, then coming more and more.

Describing how it felt to be baptised again, she said “When I came up from the water, I could hear the people around me, and feel the love that was coming from everybody.  It just made my heart feel really fit to burst”.

Andrea’s mother, Beulah Garnett had come over from America for the baptism, and was delighted to see Andrea baptised.  She said after the service, “I am so happy.  I am rejoicing.  I’ve been praying for so many years.  I prayed, “Lord, save my daughter”.  Explaining that her other children were all in the church, Beulah described it as “like the ninety and nine sheep, and one was out, and it was Andrea, and God has brought her in”. 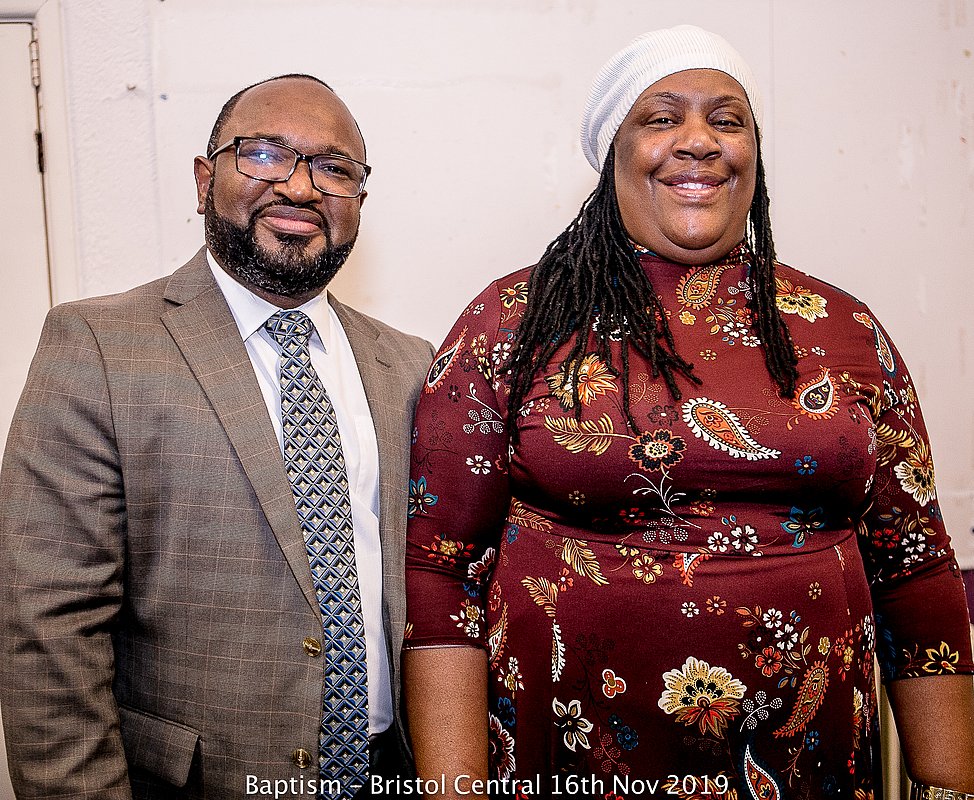 The final candidate to be baptised, was Claudette Anderson, who was joining the South Bristol congregation.

She said after the service “I’m feeling really blessed and truly anointed.  I’m really happy with the decision I’ve made.  The Lord has brought me to this point”. 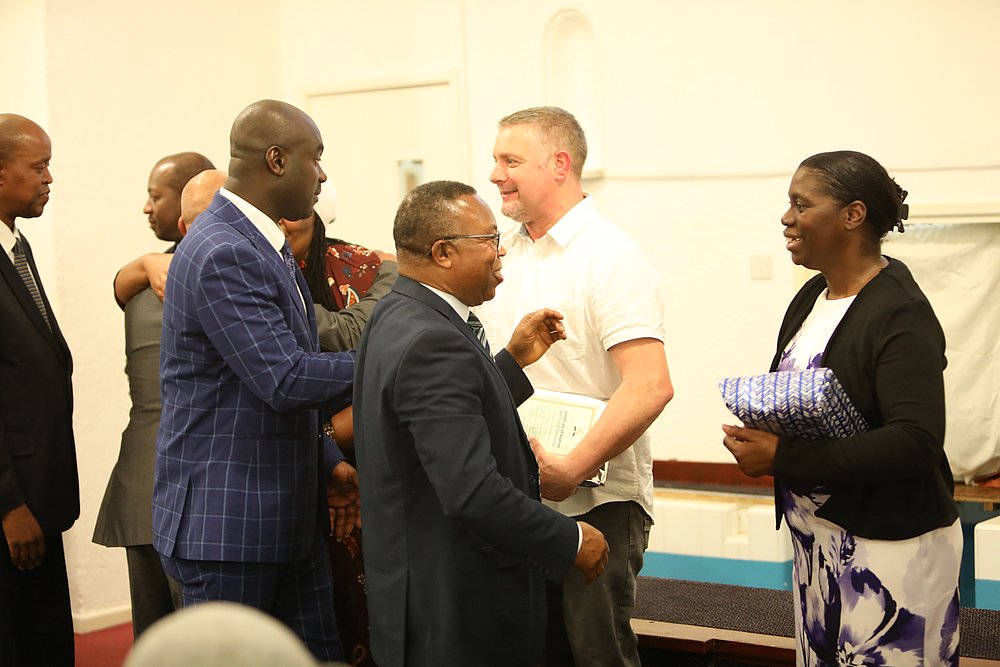 Having been brought up in a Pentecostal church, Claudette said she always wanted to study the Bible, and allow God to use her, but there was a spiritual warfare going on in her life.  Describing the journey she’d been on, she said that “God has brought me back, and to a church which will help me to grow.  I love the people there, and I feel that the Lord has brought me there, and I feel that it’s a place I can be used”. 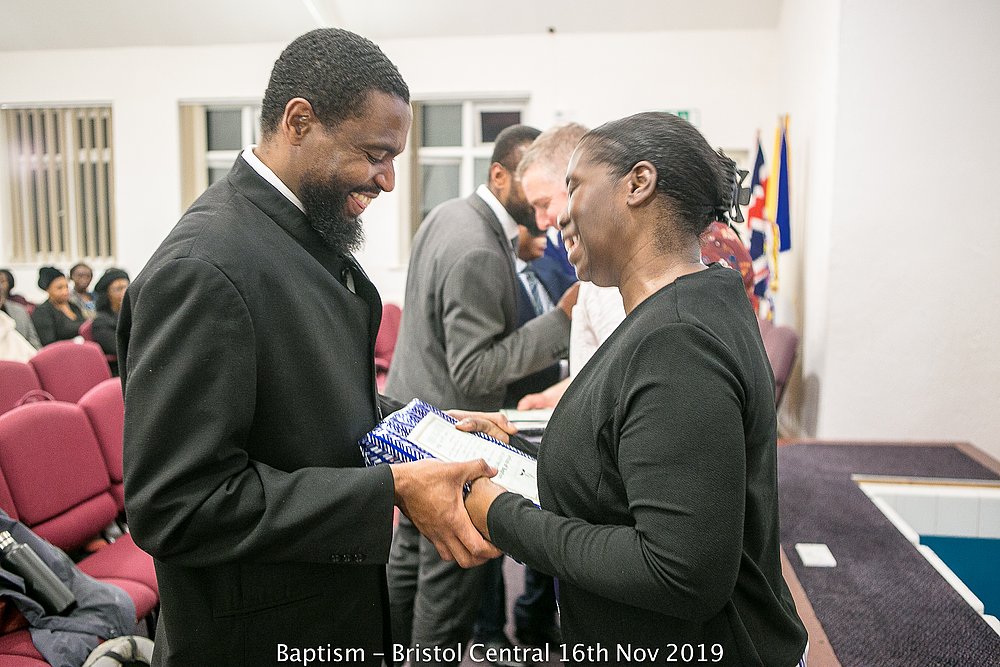 In the baptismal service, the message was given to the new members, by Bristol Central First Elder, Kwasi Dankwa.  He used the story of the Ethiopian eunuch, who asked for guidance when reading the scriptures, and encouraged the candidates to continue in their Bible studies, and seeking support in the church family.

This advice was much appreciated, by the new and old members alike.

Following the service, there were big smiles all round, as the whole church gathered to greet and welcome the new members, and encourage them to remain strong, now they had made their decision for Christ.