When Pastor Sam Davis was a ministerial student at Newbold College in the early 1980s, for rest and relaxation he often frequented the gymnasium to play and enjoy a game of five-a-side football with fellow students. Given the then-bare concrete walls and floor, every kick and every bounce of the ball ‘boomed’ as the sound bounced around the room.

Sam and Rowena were the parents of two toddlers, Anthea (aged 3), and Andrew (aged 18 months). Full of hope and optimism about the future, they lived sacrificially in the college’s ‘married students’ accommodation, Binfield Hall. However, they were committed to serving the Lord and His church, and looked forward to graduating, ministerial employment, and settling down as a family. Their future lay ahead, with all the bright optimism any family could reasonably expect: not least, recognising that the Lord was travelling with them.

Thirty-seven years later, those gathered in the same college gymnasium on Tuesday 7 January heard another ‘boom’ effect, this time created by the beat of the Pathfinder Drum Corps. It was their way of saluting their pastor, mentor and leader, Pastor Andrew Davis, as they led his coffin into the gymnasium: now not only a gym, but a multi-purpose meeting venue. 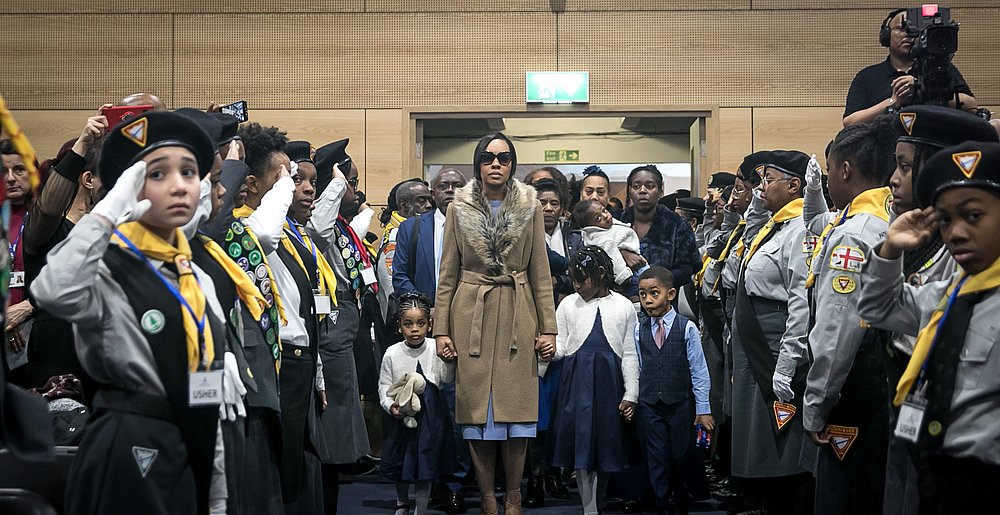 Leading the family was Andrew’s wife, Natasha, and their three young children, Leila, Malachi and Zoe. The unexpected and sudden death of a loved one causes compounded grief. As Anthea Davis Barclay described in the eulogy, ‘The loss of Andrew to his family and community is colossal, and he is most desperately missed.’ 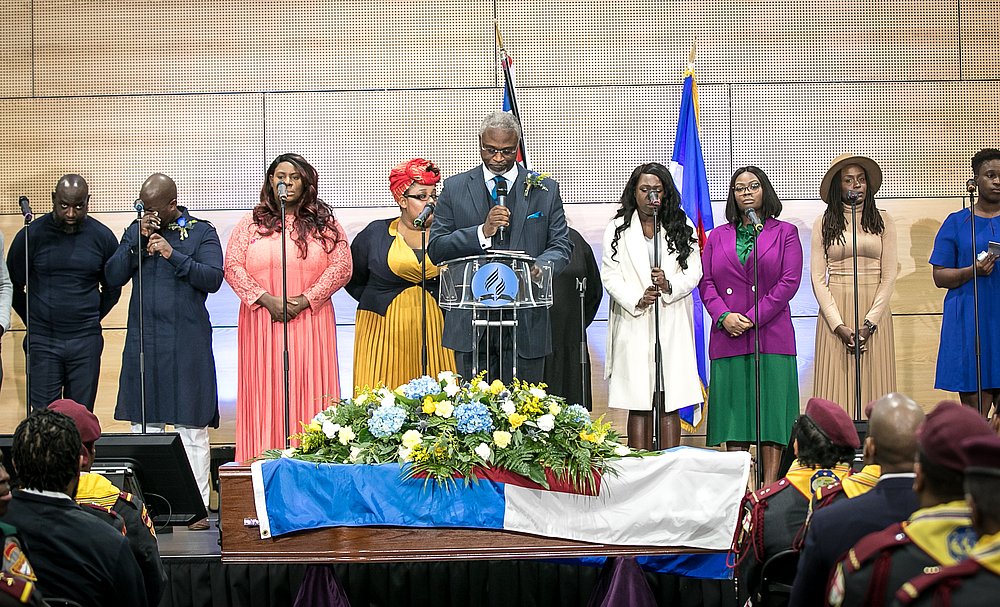 But, as South England Conference President, Pastor Emmanuel Osei, gave his welcome to all assembled, he gave direction that the intent of the service was to celebrate and give thanks for Andrew’s life, emphasising that ‘the family mourn as those who have a hope’, which was likewise expressed in one of the chosen songs, ‘In Christ Alone’: ‘From life’s first cry to final breath, Jesus commands my destiny. No power of hell, no scheme of man, Can ever pluck me from His hand: Till He returns or calls me home, Here in the power of Christ I’ll stand.’ 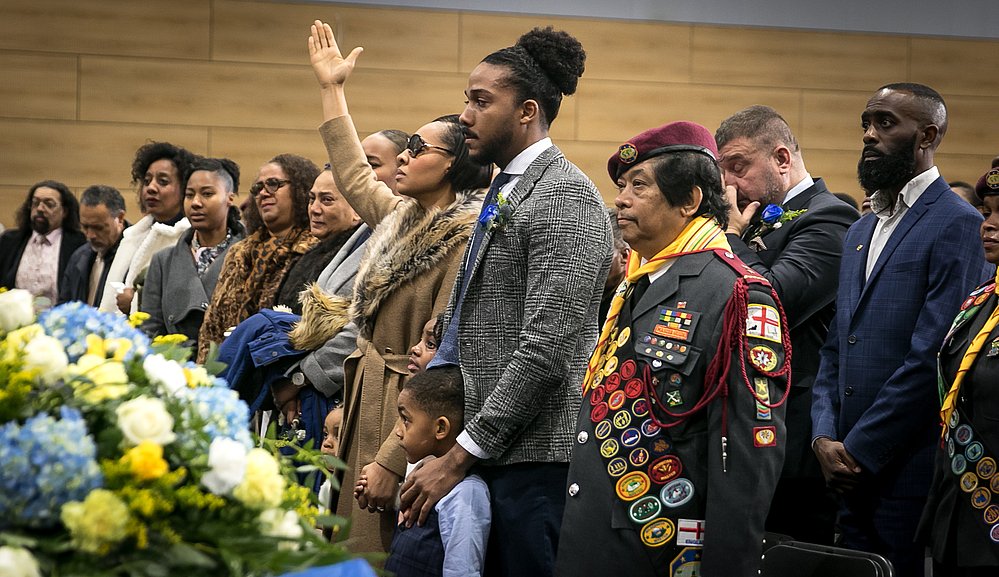 It was as if Natasha, her immediate family, the Davis family, and the church family had gathered together with almost a sense of holy defiance to challenge the ‘power of hell’. It was as if we were collectively saying, ‘Death may take Andrew, but because he is a child of God, and “in Him” he stood, he will never be plucked from “His hand”, and neither will we!’

All the same, as Pastor Sam Ouadjo prayed, ‘Lord, we are here to hear a word of comfort from You. How can we be glad?’ Lament and holy confidence in the Lord meshed together: grief with hope; pain mixed with holy pride in someone who loved people. 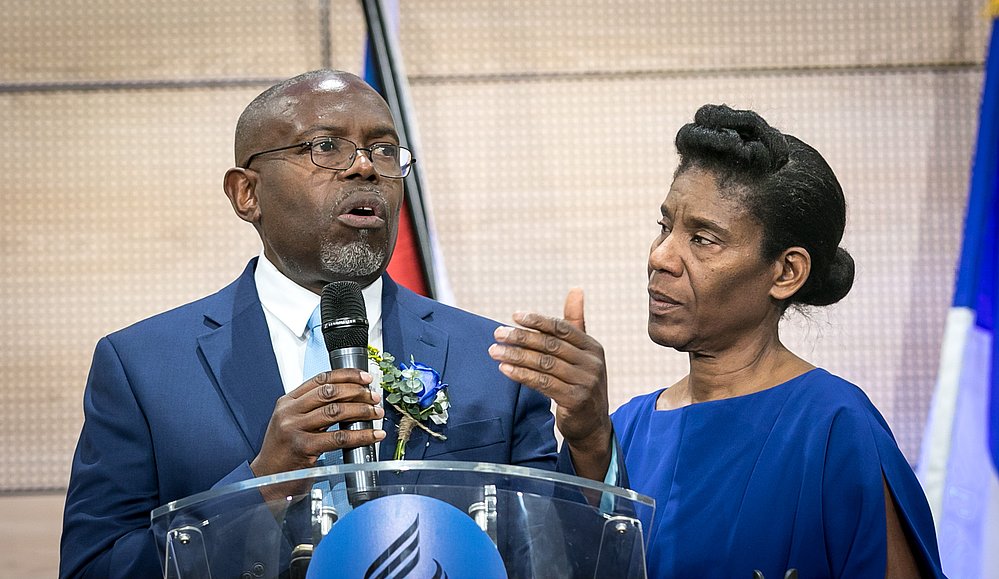 As Sam and Rowena Davis gave their tribute, the only reaction of all present was to pray for them. To have to share the story of someone whom they’d loved, nurtured and sacrificed for was stirring. Naturally, they both shared some cheerful anecdotes about Andrew’s competitive nature, and the fun they had together. Rowena was quick to highlight how Andrew was loved unconditionally. Sam elaborated on this by saying that ‘God took hold of Andrew, changed him, shaped him and moulded him into what it was to be a husband and dad.’ What shone through was that Sam and Andrew were best friends, soulmates: but, as Sam concluded, he reiterated the context by saying, ‘When God causes you to down the bitter cup of bereavement, remember that He’s the one holding it to your lips.’ 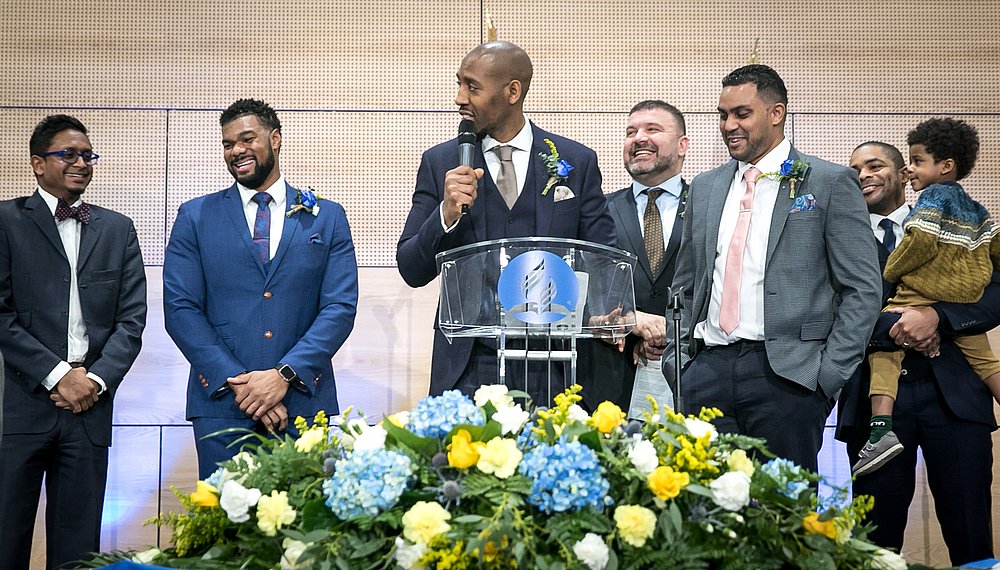 Andrew’s student peer group comprised Micah Campbell, Vili Costescu, Anthony Fuller, Sam Gungaloo, Matthew Herel and Max McKenzie-Cook, now all serving as pastors. Matthew Herel shared on their behalf how the group have all been on an educational, professional and spiritual journey together. He explained how Andrew took the lead to make sure that ‘no man was left behind’, and that they all finished the course, literally and metaphorically. The biggest tribute they felt they could give him was to remind all present that they are who they are today because of him.

This report does not have space to report on how Andrew was loved by the members he served, first in Brixton, Colchester, then in the Ipswich, Clacton and Newbold College churches. Nor should we forget Andrew’s ministry to children and youth. It was in 2019 that He received his Pathfinder leadership Master Guide award.

However, his most recent pastoral appointment was to the Reading district. Local church elders Boikie Osupeng (Reading Central) and Steve Griffiths (Reading Parkside) both spoke of his vision, enthusiasm and passion for outreach and evangelism. From what they shared, it was clear that ‘mingling’ was his thing. Nothing pleased him more than connecting with people – church people, young people, old people, community people. The 8 November edition of Messenger reported on the autumn Reading Central evangelistic campaign organised by Andrew – following which twenty people were baptised and are experiencing new life in Christ.

Understandably, it was hard not to feel choked up as Natasha Davis with her three children shared a tribute on a pre-prepared video. Together they shared how much they loved the one they now miss so much.

Pastor Jonathan Burnett, in his sermon, explained how Andrew was named after the disciple Andrew (the introducer) by his parents. As if in a direct challenge to the forces of evil, he reminded listeners of the devil’s intention to destroy Jesus. ‘If you think you can destroy a seed by burying him, you are mistaken.’ Within minutes of making that statement, the preacher appealed for a response, and two young men responded by committing themselves to prepare to serve in full-time pastoral ministry.

As music went from lament to praise, headed by the Reading Community Gospel Choir, the service ended with the choir singing ‘Hallelujah’ as the coffin and the family departed to the crematorium, once again led by the Pathfinder Drum Corps. As Andrew’s remaining family and close friends left, the wider church family stayed behind and reflected. In a strange sort of way, it was good to see the church family together.

Pastor Andrew Davis has left us a legacy of brilliance, excellence and commitment – to his Lord and Saviour, to the church he served, and (by no means least), to his beloved Natasha, Leila, Malachi and Zoe. Maranatha!

The obituary of Pastor Andrew Davis will be published in the next edition of Messenger, due on 7 February.