"Let's Cross Over", was the inspired theme for the South England Conference (SEC) Camp Meeting 2022. The largest spiritual convocation in the SEC calendar returned this year to a new location and format after 2 years of virtual-only meetings during the covid pandemic. Approximately 150 attendees at the Conference-owned Hay's Wood Retreat Centre – set in 70 acres of Norfolk countryside – were joined by an online audience of thousands throughout the week. 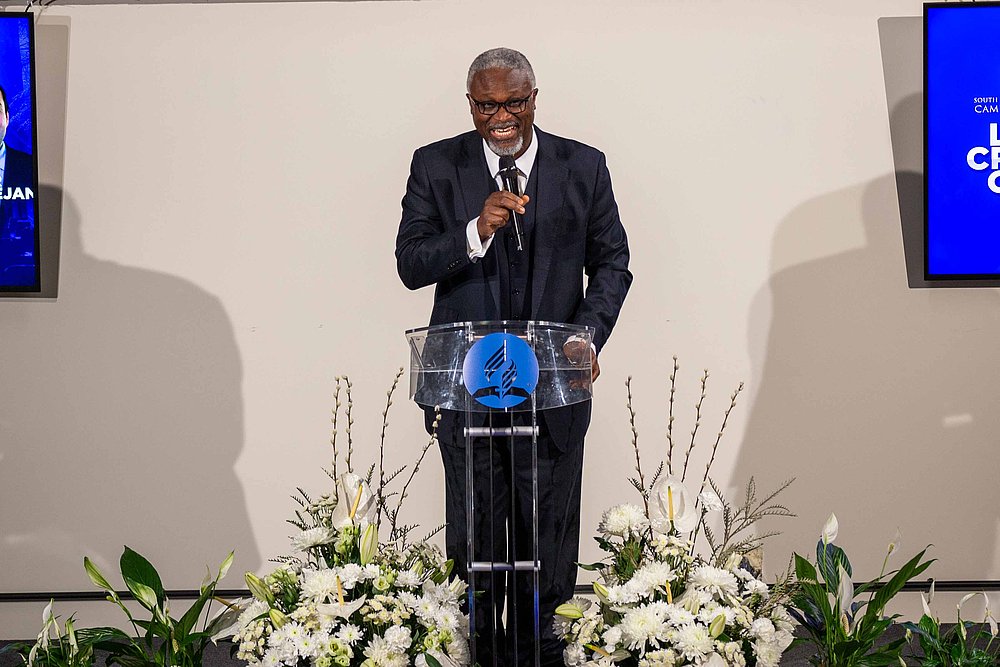 Opening night speaker, SEC President Dr Emmanuel Osei stated that the "hybrid" nature of the event" marked a "slow and gradual" move to a "face-to-face camp meeting experience".  He also expressed the hope that "as time goes by we will be able to develop more of Hay's Wood so that we can hold a full camp meeting."

Making spiritual and literal connections with the "cross over" theme during his sermon, Osei went through the story of Jesus calming the storm as He crossed the sea of Galilee with His disciples in Mark 4:35-41. Osei concluded: "Put your trust in Him. Have faith in Him... I'm looking forward to crossing over because I know that He's on board with us." 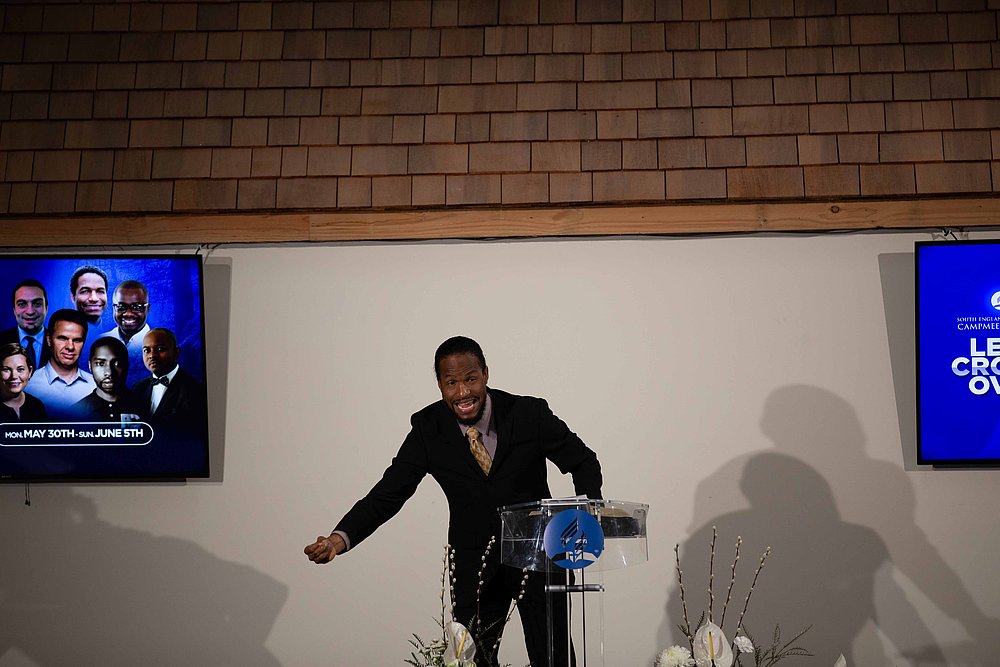 Each morning Camp Meeting started at 6:30 am with 'A Prayerful Journey,' – a session of prayer, testimonies and inspirational messages from SEC Teens Ministries Director, Pastor Juan Carlos Patrick. His series illustrated God's transforming power through personal stories and the lives of different Bible characters, including the woman caught in adultery in John 8. 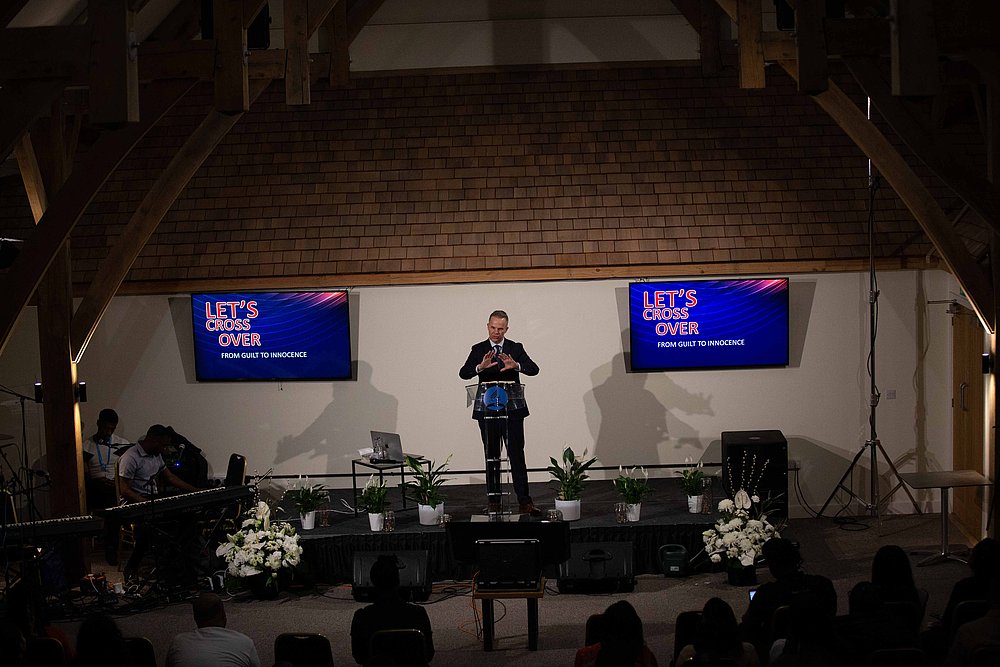 Pastor Ty Gibson's, evangelistic series started on Tuesday evening with the first of his thought-provoking sermons. In "Let's Cross Over: From Guilt to Innocence," he challenged the perception that "lives must become better to attract God's attention" or that "we must do something to rectify something in us, to get God to love us." He reminded the audience that "God relates to people according to their potential rather than their actual condition." 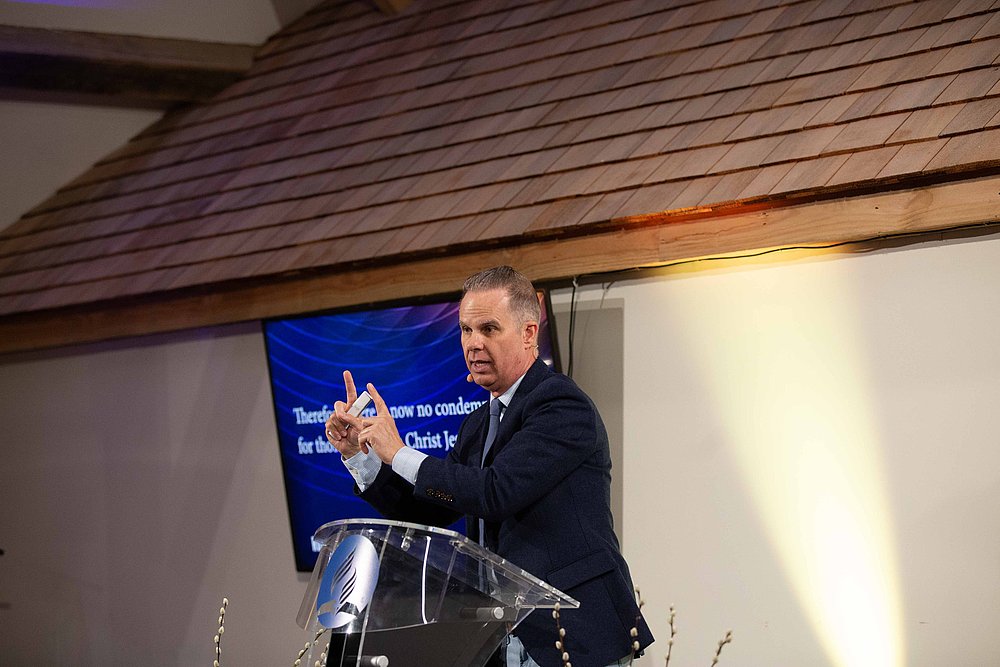 Wednesday's sermon "Let's Cross Over: From Fear to Love", detailed the "only legitimate motive for serving God – love for Him. Gibson expounded on Romans 8:15 to show how "the fatherhood of God removes fear from our hearts and put love in its place." 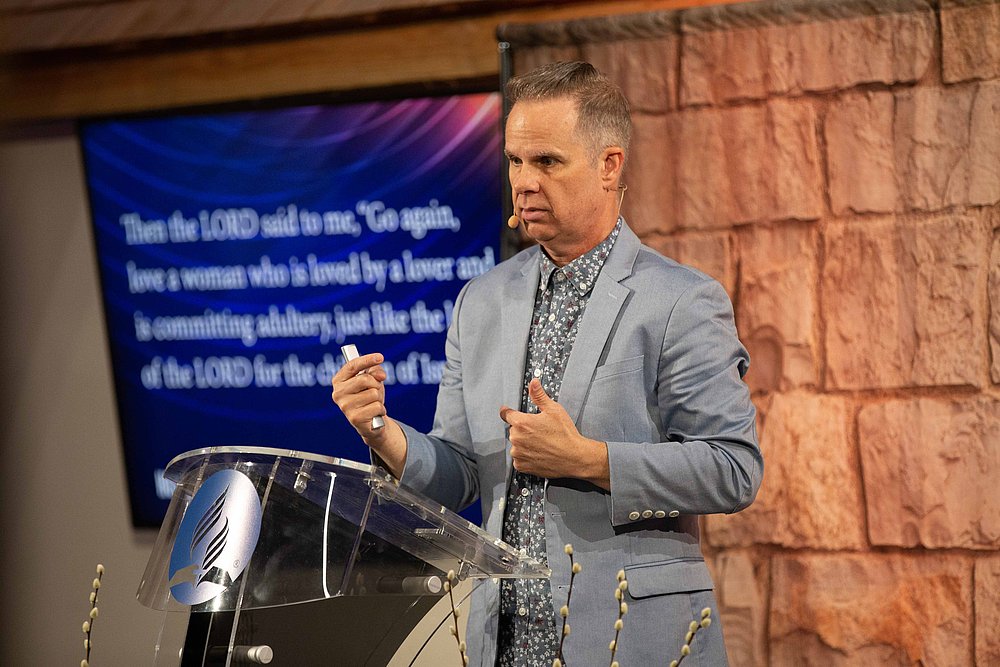 On Thursday, Gibson spoke on "Let's Cross Over: From Obligation to Attraction." He posed the question: "Are you attracted to God?" Then urged for a paradigm shift away from having a master-servant relationship to the love relationship of a husband to his spouse that God asks for in Hosea 2:16-18.

In Friday's session, he preached on "Let's Cross Over: From Weakness to Power" using the story of when he drove a Bugatti supercar to help illustrate the concept of the "righteousness of faith" in Galatians 5:5-6. 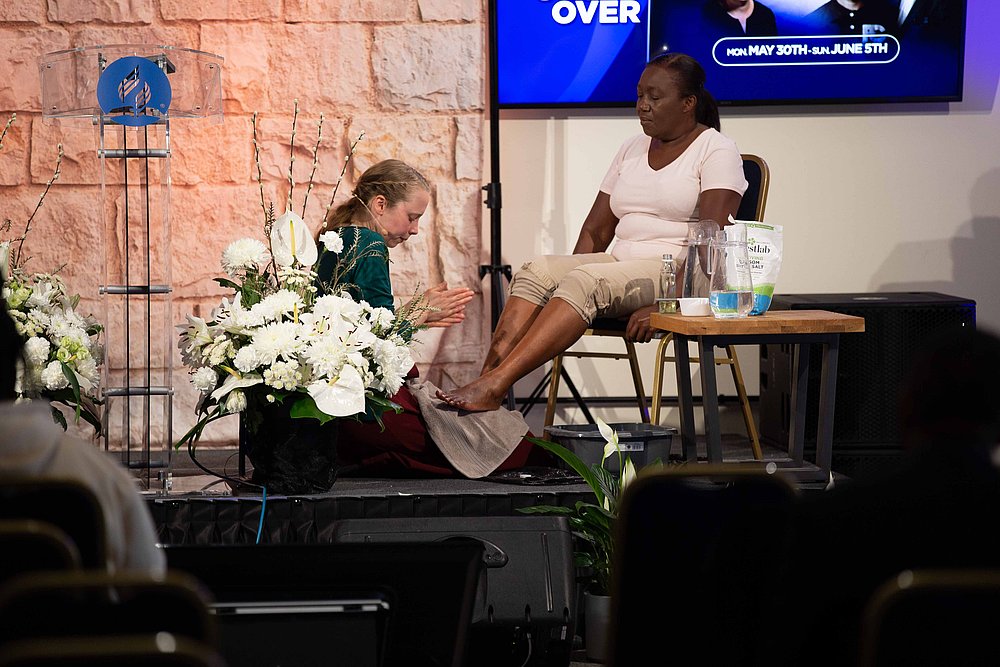 Other programmes included daily health presentations.  'Life 180' featured Medical Missionaries, Jacqueline Brown and family, who spoke on how to strengthen the immune system, master stress, and prevent and reverse lifestyle diseases. They also gave cooking demonstrations and massages for campers. 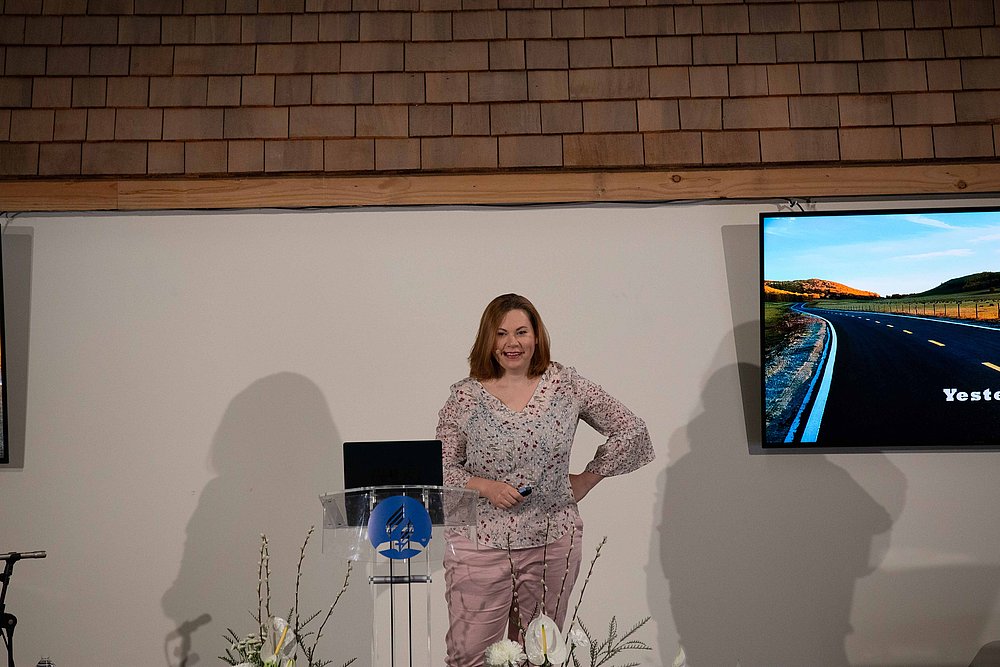 'Your Mental Health and Different Seasons' was a session held by NEC Community Services Director, Dr Beatrice Kastrati. On the first day of the interactive workshop, on-site and online audiences evaluated their values and checked what was important in life, and on subsequent days, discovered their strengths and spiritual gifts. Kastrati also used Biblical principles to explore the issues of forgiveness and grace, dealing with the past, and how to be more optimistic about the future. She encouraged the attendees to break the chains of the past "so that we can cross over and move forward with optimism." 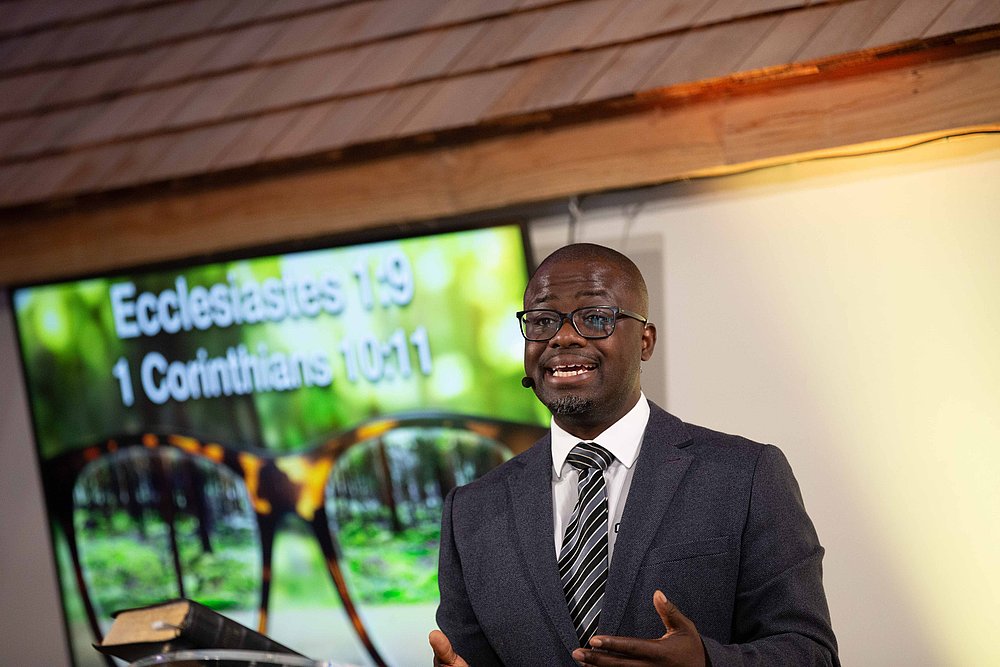 Daily Bible studies were held by North England Conference (NEC) Bible Instructor and Director of Crisis Talks Ministry, André Crawford. His series 'Common People's Revival' (CPR), drew parallels from Old Testament stories and characters to our experiences in 2022. Case studies included ancient Israel waiting to cross over to the promised land, and the lives of Samson and Gideon. Crawford's central theme was that ministry always begins with sacrifice. "It always begins with what you're willing to give, rather than what you want to get." 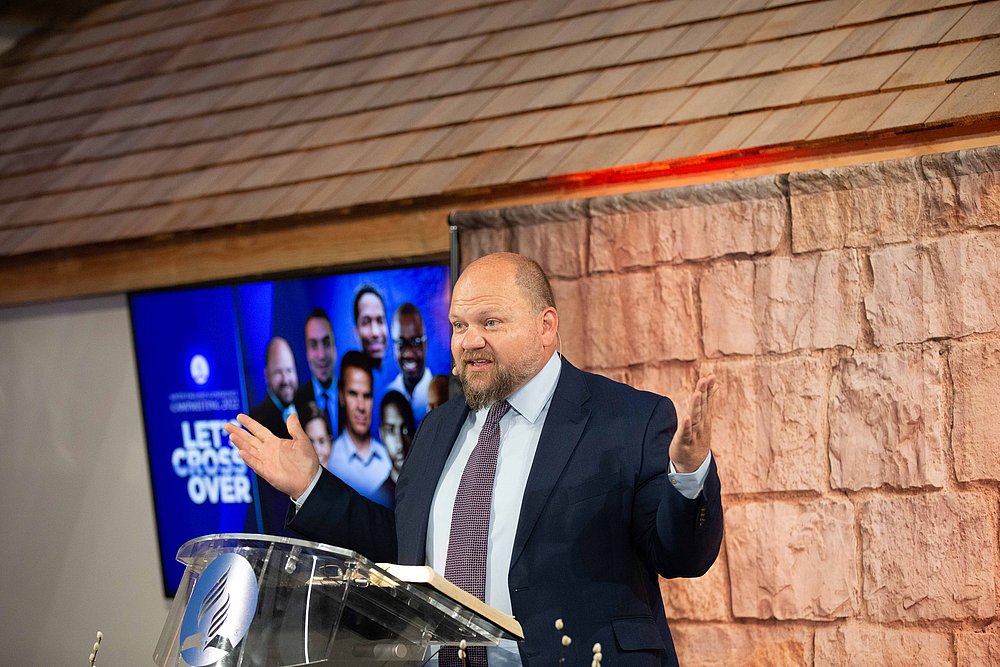 SEC Church Growth and Advent Mission Director, Pastor Wayne Erasmus presented, 1st Century Wisdom for 21st Century Lives, in which he spoke about "practical discipleship" and the "strange conversations" Jesus had with Nicodemus, the Samaritan woman, Simon Peter, and the women who touched the hem of His garment. 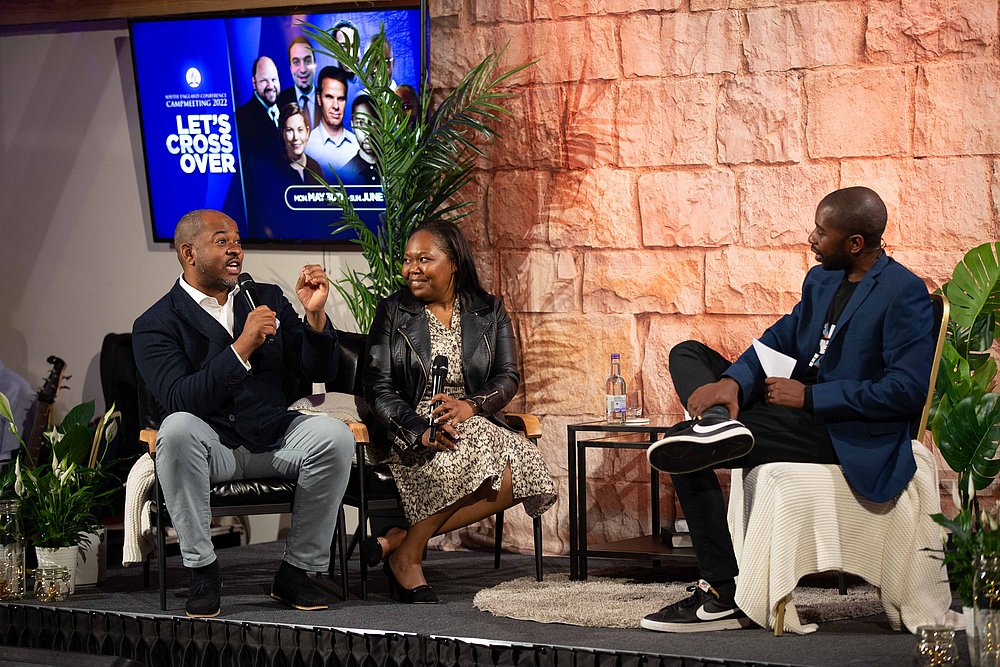 Among the innovations of the camp meeting was the talk show 'The Cross Over,' hosted by theatre producer and poet Jermaine Wong. When required, the platform was transformed into a talk show studio set, where Wong conducted conversational interviews with special guests including camp meeting presenters and organisers. The show also featured musical items and prize giveaways. 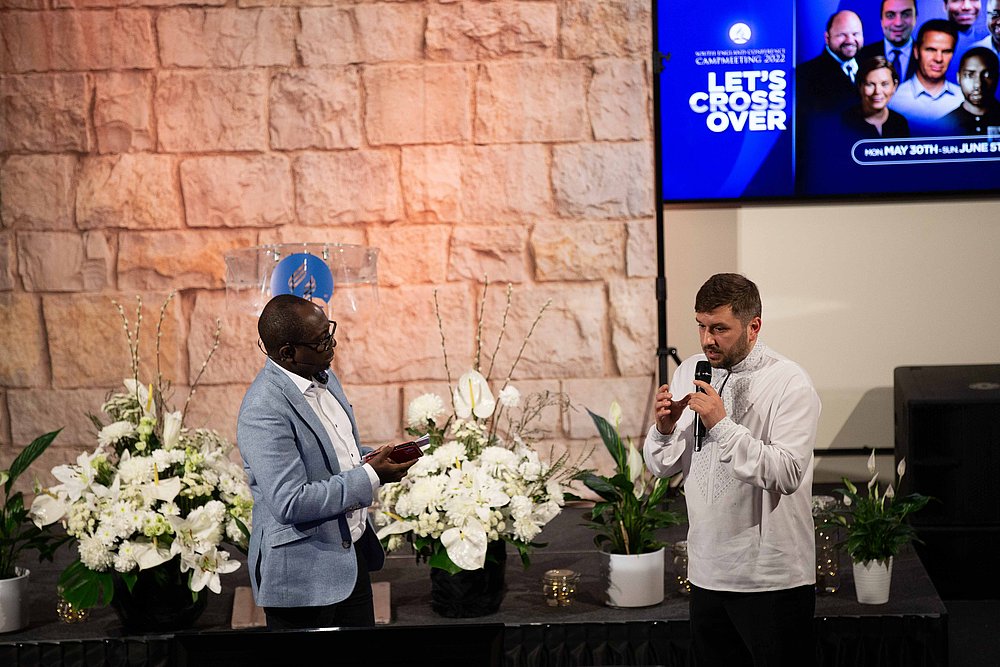 One of the week's several highlights included performances and interviews with a group of singers and musicians from the London Ukrainian Church Group and their pastor Vasyl Vartsaba. The group gave details on the impact of the war in Ukraine following the Russian invasion, sharing updates on aid relief projects, stories of miracles and personal testimonies of God's love and deliverance. 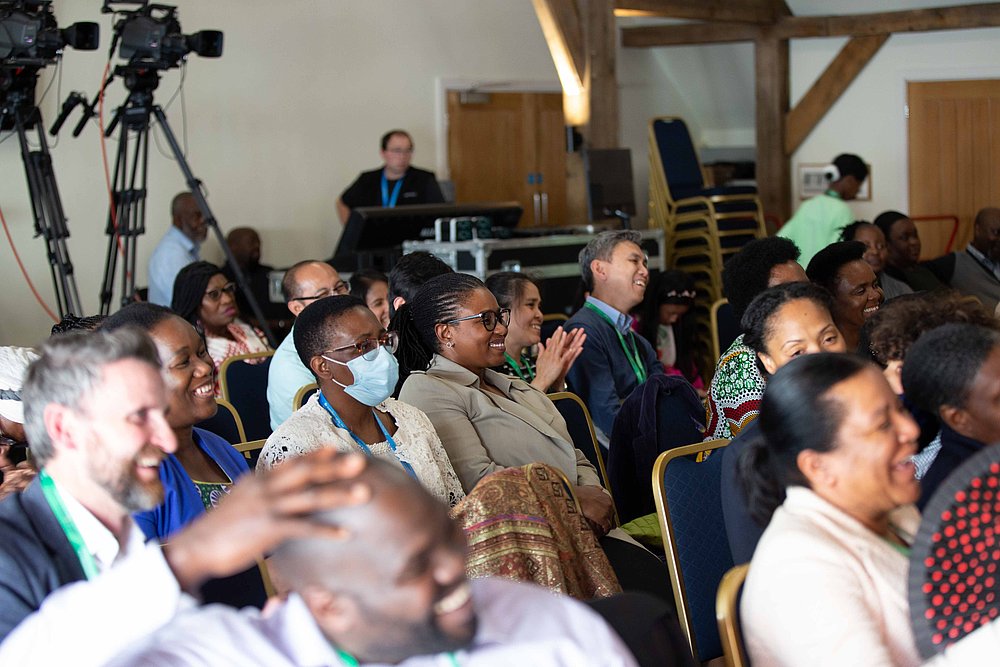 Sabbath saw the largest on-site presence as additional pre-booked visitors made the journey to Hay's Wood. The day began with Pastor Juan Carlos Partrick's penultimate early morning presentation. Patrick examined the transformational story of the demoniac in Mark 5, who went from being possessed by a legion of demons to wanting to follow Christ and testified of God's mercy and love. 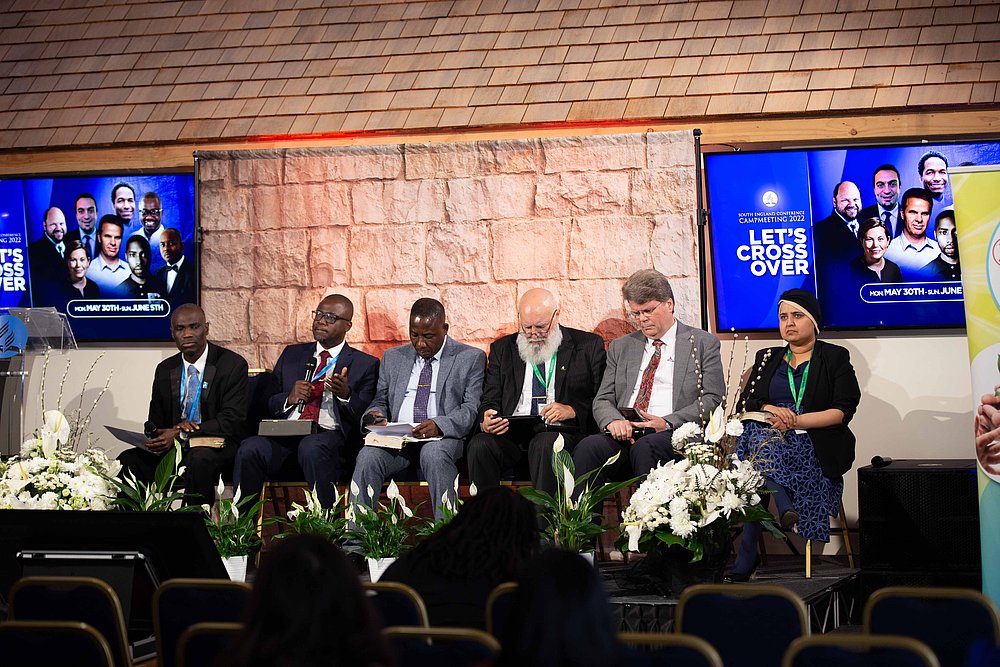 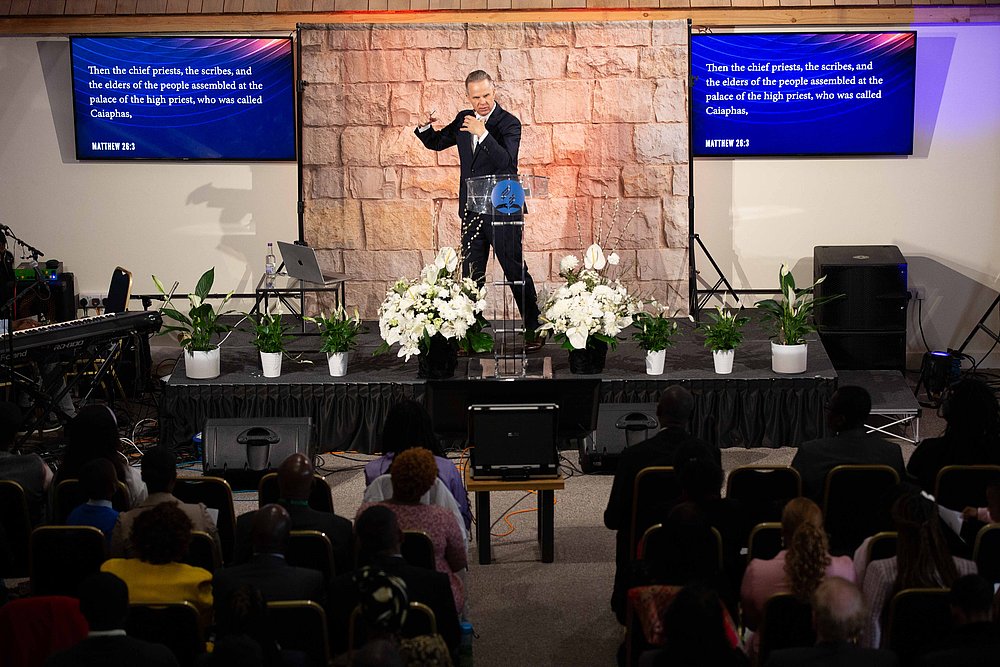 The final two sermons by Pastor Ty Gibson were preached on either side of the break for lunch. "Let's Cross Over: From Bondage to Freedom" identified the life of Mary Magdalene as a prophetic illustration "of the experience the gospel produces in all who receive it." Gibson reflected that "bondage to sin and shame is broken by God's forgiving love." 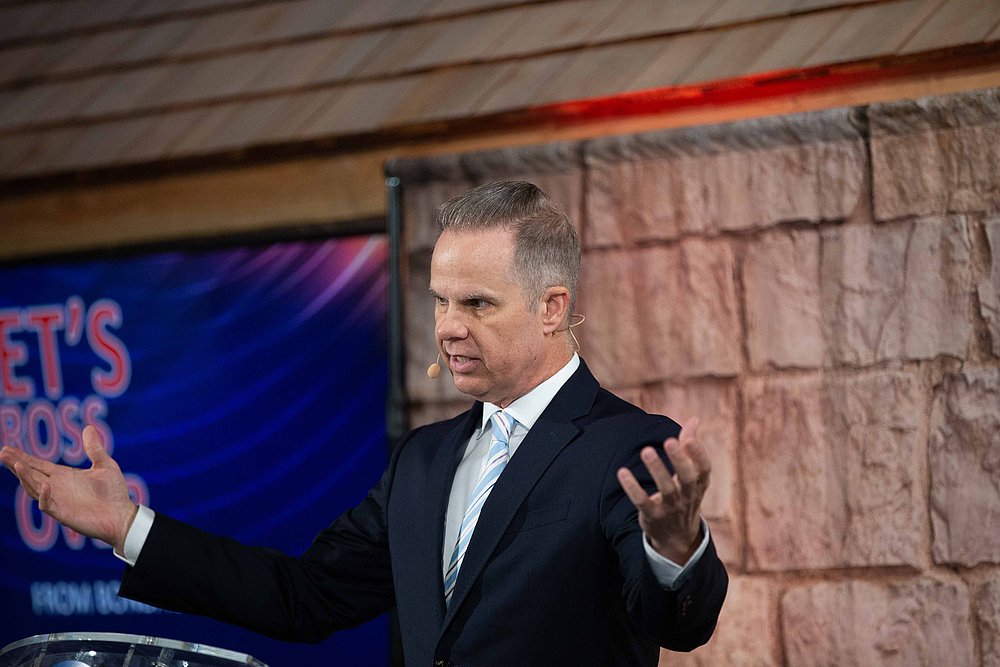 Gibson's concluding sermon was "Let's Cross Over: From Empty to Full". The emphasis was on God's unfailing love covenant with mankind. In closing, he appealed to the audience: "Make a shift of focus in which you look long and deep into the heart of God's love for you, until you know with absolute certainty that you yourself love him in return, not out of cultural obligation or you were born and raised in the church, but that you would come to own your faith as a personal experiential state of awe and adoration." 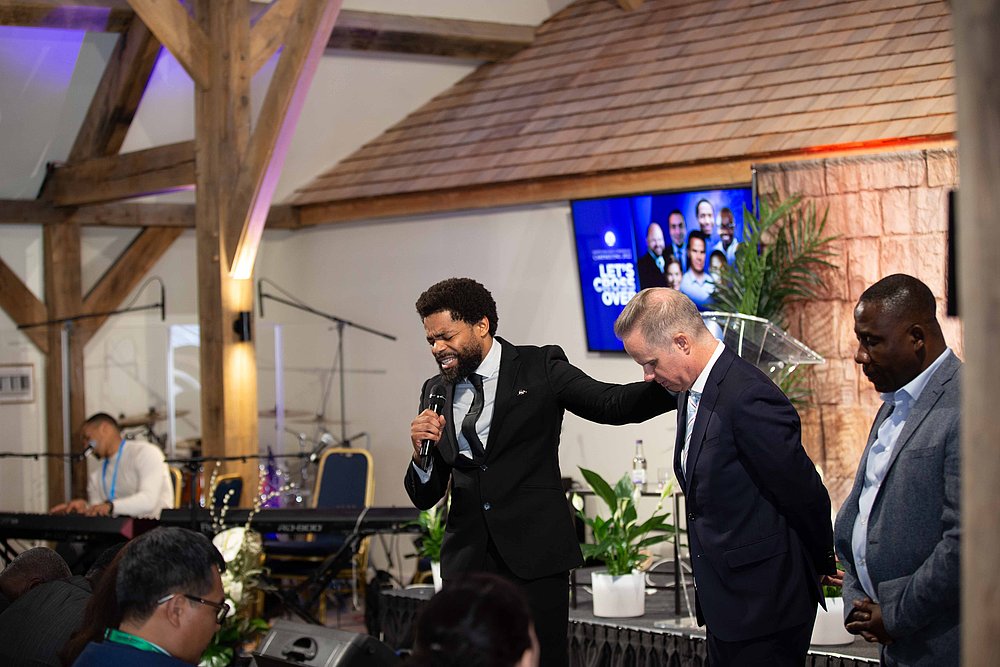 After a vote of thanks by SEC Youth Director, Pastor Anthony Fuller, an evening concert was held featuring a variety of musical talents including the camp meeting's signing evangelists, soloists Michelle Boyd and Michela Mathieu-Marius, in addition to the praise team and band led by CJ Nicholls.

A social and campfire then took place for the on-site attendees who mingled and laughed, ate and drank with each other. Comments such as, "What a wonderful spirit-filled experience" and "Camp Meeting is back!" were shared and echoed by the group late into the night. 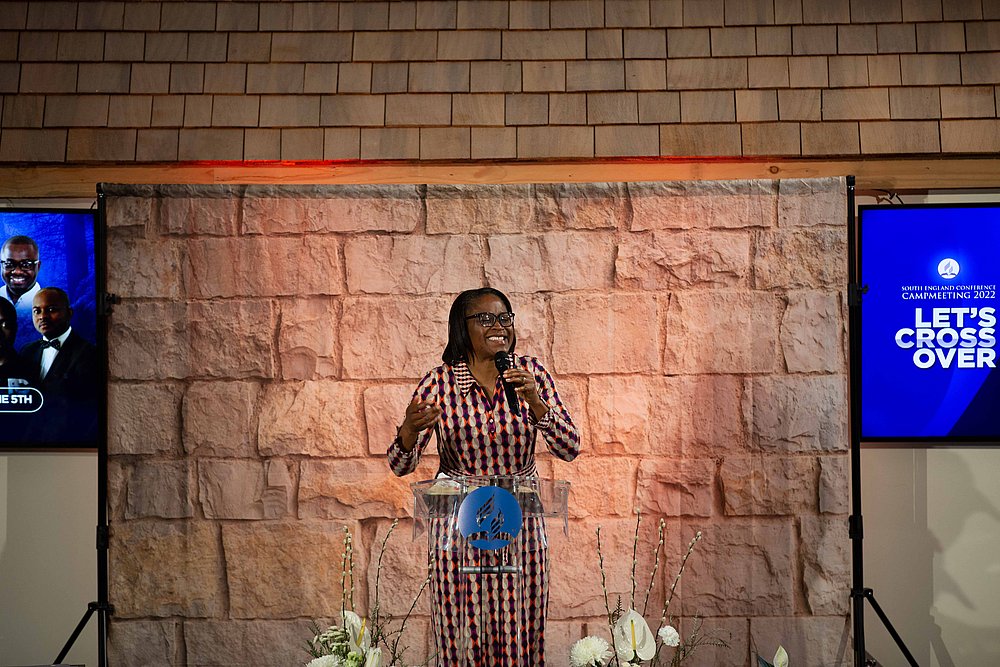